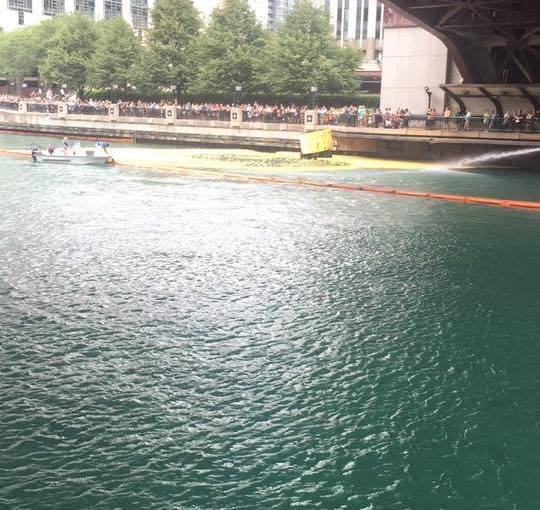 Hmmm, my first real attempt at tempo run in awhile. Why did I chose to run the middle of the day in hot & muggy weather?

Classic route: The Chicago Riverwalk to the Lakefront Path.

The warm-up: As I ran down the riverwalk, I wondered why there were so many people, but also how it could be so cloudy and so muggy? I continued to dodge people during my long warm-up and try to relax into the run. I was anxious about “having” to push the pace for 3 miles. Ugh, why is the warm-up 1.5 miles long? From the office to the lakefront is exactly 1 mile, however will I get in the extra .5? I got in my starting my watch slightly early than normal and continuing to dodge people on the Lakefront heading to Lolla. It actually worked out well. Around 3/4 of a mile, I hit the water misted near the architectural tour. I definitely ran through the mister, because again it was hot and muggy. I made to the Lakefront and ran into a fellow Volee member and just wanted to turn around and run with her. I didn’t really have to do these tempo miles, did I? But, I just said hi and finished my  warm-up.

The tempo miles (Lolla playing in the background): Okay, time to drop the pace but to what….I tried to go on feel and what I thought could be sustainable for 3 miles, but the air was thick and my legs were like jelly from the previous day’s massage. The first mile was over and I thought I could drop the pace some more, so I did. After 1.5 miles, I stopped to stretch my shoulder and drink some water, but also rest because the thick air was too much. I approached the Museum and was glad to see it. Hey, when was the last time that I had enough mileage in me that I could run to the museum?! I was thankful for this moment of clarity and remembering that pace shouldn’t matter as much. My mind began to wonder to recent social situations (i.e. why do people lie and cheat? and why didn’t I trust my gut instinct to just run away?). I became refocused on the turnaround and decided to pick the sidewalk closer to lake. Th waves were crashing into the sidewalk and I just wanted to join them- taking a nice jump into the lake sounded great. Instead, I paused at mile 2.5 and watched the waves. I decided to finish the last .5 and as I ran by the bathrooms- I remembered the time that I hid them from a certain jerk (and how I wouldn’t be doing that again!).

Cooldown: I made it onto the riverwalk and it was more crowded than I’ve ever seen. I looked over into the river and saw all the Rubber Ducks! It was the Rubber Duck Derby 2017 supporting the special Olympics! I was slightly less frustrated by all the people and I paused to watch the Rubber ducks float down the river. I finished my cooldown, knowing that a cool smoothie was in my future.